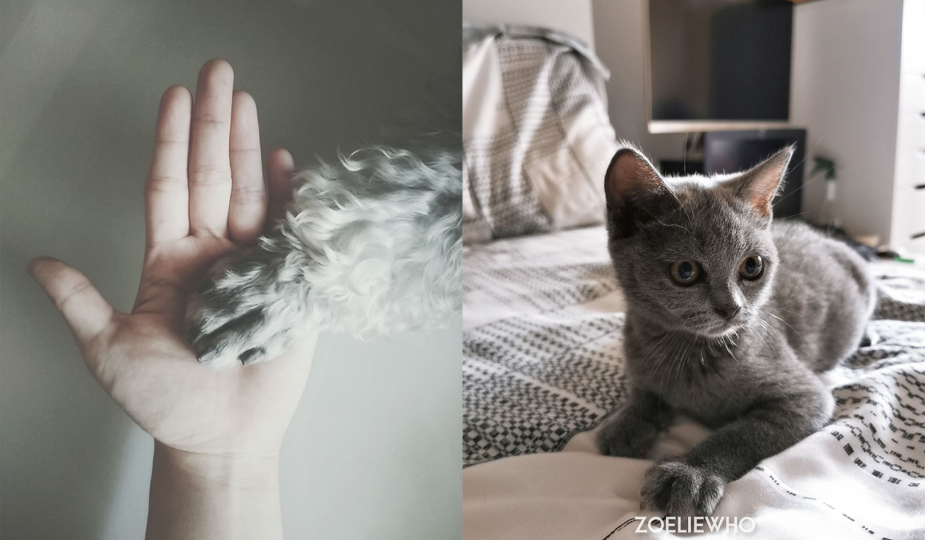 It has been many years since I had first gotten my own pet. That was around 2006, in a pet shop located at Chinatown. My parents picked up a lovely salt and pepper Schnauzer instead of its snow-white sister. We named him Happy and he was indeed happy until he passed away in late June of 2018 due to many complications.

The past couple of years has been a tad bit lonely. We have two more dogs but it’s just not the same. They weren’t ‘mine’ if that made any sense. Happy was widely known to be ‘my dog’ because I was the main caretaker and he was only loyal to me. That doesn’t really make him my “son” though, it was more of a little brother. His complication was more painful for me to witness but I had seen it coming. It took me over 5 years to prepare myself for that day. Countless nights crying and sobbing while he was sleeping next to me. Sounded silly but I knew it would happen because he was once hit by a car. There was nothing much to do back then. He loved to rummage rubbish bins and that added toll onto his oral health and his liver’s health. 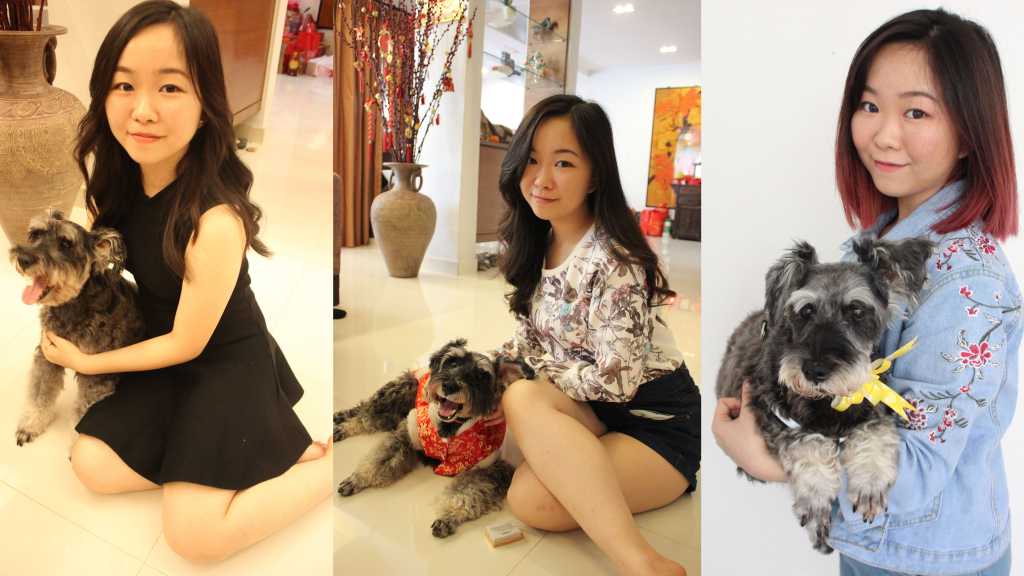 He was about 14 years old when he finally collapsed and I had demanded my family to agree with letting him go. I was the first and the most determined to suggest euthanizing him. It was just too hard to bear seeing him lying on the floor, on top of a piece of towel. So lifeless and full of pain. By the time we finished the process, he already had maggots growing around his mouth, where a large lump was growing on his gum, hindering him from eating properly for years. He also lost a lot of teeth while he was ageing. His organs were failing, the liver was swollen, and he was limping more obviously just months before he turned weak. Oh, we found out about the maggots on the way home, where the tiny little buggers wiggled their way out of the body in the car.

Sorry, that went a little heavy there. Uhm… There’s always a question I had in my head that I wasn’t sure if it was a coincidence though. Many years back then, I asked him not to “go so soon” and at least wait until (a) I finished my very last university exams,  and (b) found a guy who truly loved me. Looking back at my Instagram account, I made a post on the 2nd of June debuting my first relationship post with my current boyfriend of 2 years. In that post, I mentioned that my exams end on the 21st of June. After that, I had uploaded a tribute photo of Happy stating he passed away on the 26th of June 2018.  Til this day, it still baffles me. It was as though he really kept his words and stay strong until the very last week of his life.

[I kept sobbing as I typed all of these.]

I’m not gonna lie, in order for me to be sane, I relied a lot on comfort from Happy and my current boyfriend (a significant difference before and during the relationship which my family members could agree to; there was a time where I was constantly frustrated and breaking down). After Happy had passed away, I relied mostly upon my boyfriend but it wasn’t going well because there were some restrictions on his freedom. This was especially with the lockdowns. It is now harder to have the same sort of emotional + physical comfort that I used to have before. On top of that, the possibility of having more lockdowns in near future had made me even more anxious as well.

That’s when we thought about getting a pet that’s solely for me. It took me about a year or so to decide on the right timing and the right animal. Mostly just contemplating how am I supposed to get a lovely (and genuine) pitbull in Malaysia. It is technically impossible since they banned all the possible pitbull breeds and the local ones looked like mutts. I wanted a pitbull of the physique and the pure heart but the local ones are too skinny and don’t really have that heart shape head. It took me a very long while to let go of the idea of having a pit bull, which then I started to check out on ferrets.

The ferret was the best of both worlds for me, with the combination of dog and cat attributes whilst having its own very characteristics. The downside was to think about all the diet measurements and money budgeting, which caused me numerous headaches. Eventually, I let go of the idea of having ferrets and thought about dogs again. The next option would be rottweilers but they are more of silly doofuses than nursing sweethearts, for me. So I didn’t want to get another dog.

Then, during a very unexpected event, we walked passed a cat store and the cats caught my attention. I later realized that they only sell British Shorthairs. After engaging with all the cats, I raised a lot of interest in getting one. All the cats in the store showed the same type of affection for humans and reached out to me without their claws out. I spent weeks thinking about the cat breed, spent some time researching about the breed and discovered that the characteristics of this cat breed suit my current situation very much.

There was a 5-month old that I was really interested to get but it was sold away a day before I visit the store for the second time. About two weeks or so later, I went back to the store and picked up this feisty little girl that plays and meows like a boy. Her name is Luna, a name I had in mind during my researching phase.

Why buying a British Shorthair instead of adopting a stray?

As much as I do support adopting strays and rescued animals, I would want to stress out that it is also important that we are able to pair well with the pet, especially when the intention is to have a companion instead of building a safe house/sanctuary. Most people who adopt strays/rescued animals can adapt to any sorts of behaviour exhibit by those animals.

Me on the other hand, I require patience, love and assurance from other people. This made me incapable to be tolerant towards disruptive behaviours. With my years of experience with dogs, many stray dogs are easily tamed and can turn into an obedient one very quickly. However, cats are known to be in control rather than being controlled and so stray/rescued cats are definitely not suitable for me.

I personally do not check on cat breeds because -quite frankly- I am more interested in dogs. However, since my first encounter with the cat breed, British Shorthair, I had some hope that I could finally own a cat without going crazy. After doing some researches, I made sure that I am able to commit to a British Shorthair’s behaviour before actually getting one. Here’s a list of reasons:

You can read more from this very helpful website: My British Shorthair

A day after my birthday, my boyfriend and I decided to drop by the shop and we were prepared to spend about three thousand bucks for a new kitten. We took some time to pick between the lilac one and this one because the lilac one was calm but the seller said an active kitten is way better. Since we both also prefer Russian Blue, we ended up getting this chatty little girl. She was yelling for her freedom the whole way home and my boyfriend tried so hard not to get frustrated.

She tore the cellophane tape, shoved her head out and managed to break free from the box. Luckily, we were already in my room. We had also successfully sneaked everything else into my room. Nobody knows until days later, where the packaging box for her cage was right outside my room, giving an obvious hint.

Here we are trying to pose a few days later to announce to the world that I have daughter now. My boyfriend is the stepfather. Mutual agreement.

She’s active. Too active. I was expecting her to be more elegant but she showed nothing but boyish playfulness. She would explore the room and then run away when we are walking closer to her. It’s mainly the sounds of footsteps. Then, when she plays, she goes running around the room with a toy in her mouth, specifically a shoestring. She would tackle the toys of a long stick with her powerful paws.

All that but without the crazy clawing, scratching, biting and meowing. She’s like the unbalanced scale, too much of some aspects and too little in others. The best way to describe her is: bold/feisty/bashful, playful/active, timid/quiet, extremely chatty/lots of yelling when she doesn’t like to be confined within pet travel containers (cages are fine).

Apparently, a litter box is her playing spot. It’s now filled with litter, though. So we’ll see if she will see it as a toilet soon. She has another litter box in her cage, don’t worry. She loves stick toys with bells a lot.

I’m new to cats and when I saw the way she lies on the floor, I couldn’t stop laughing at the sight! Sometimes, she would also throw her body onto the floor to lie down.

Her face was obviously not having it.

Many Expressions of Luna

Many Sleeping Poses of Luna

She really doesn’t care about her image!

I’m quite happy that we had decided to get a cat though. I wasn’t ready for puppy’s constant barking, especially when I treasure sleep too much lately. Luna makes some sounds but they’re very soft. Besides, she doesn’t cause problems besides being yappy in very little occasions. Anyway, that’s all for now! I promise you that you will definitely see more of her soon. If you’d like to check up on updates every day, feel free to follow her on Instagram @LunaHadTuna ! 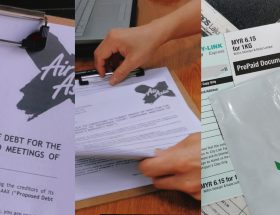 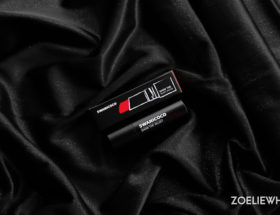