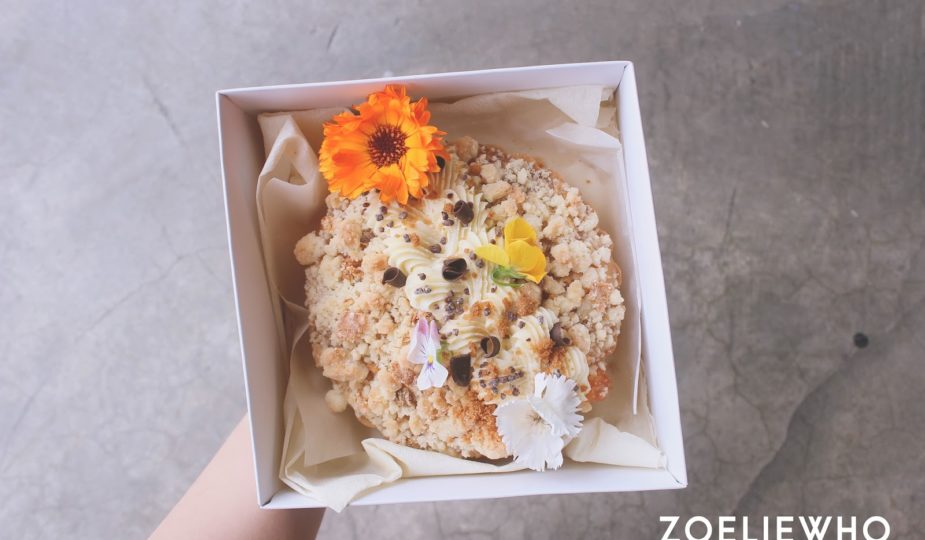 Ukay Perdana sounded very much like a rich neighborhood but to my surprise, the store was a decent family apartment floor that was owned by the humble couple. Although this is my second purchase, it was actually the first time I’ve went to their physical ‘store’ for cake collection. The store’s location was somewhat deep inside a neighborhood area that consists of many small sub-neighborhoods (Ukay Perdana is a small sub-hood). Mr Hariz, who had greeted me with full of smiles while I was in my car, handed me the cheese tart carefully and had listened to my rusty Malay language while I tried explained how extraordinary their cake was, during my first purchase: Tangled Berries. 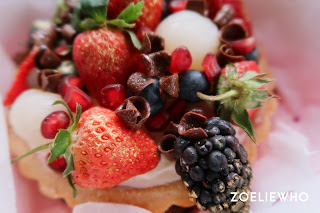 I believe that this flavour was often unpicked by many buyers as they wanted to try something more exotic (like the one mentioned above) but I’ve been wanting to try this every since I’ve found their Instagram. 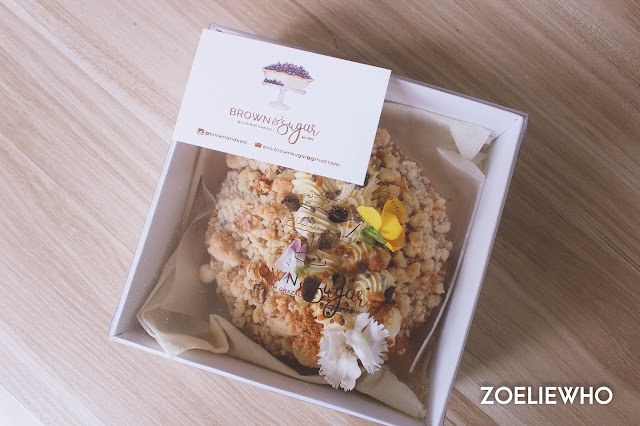 During my previous purchase, they did not place a name card on my cheese tart. This time, they did. 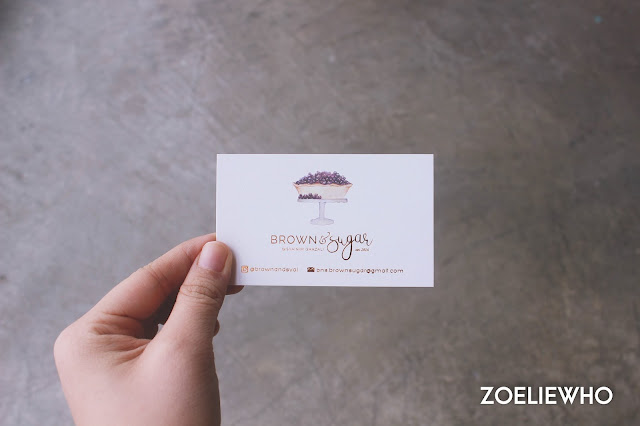 A small little note from the couple: Save Room for Desserts. Love, Brown and Sugar. 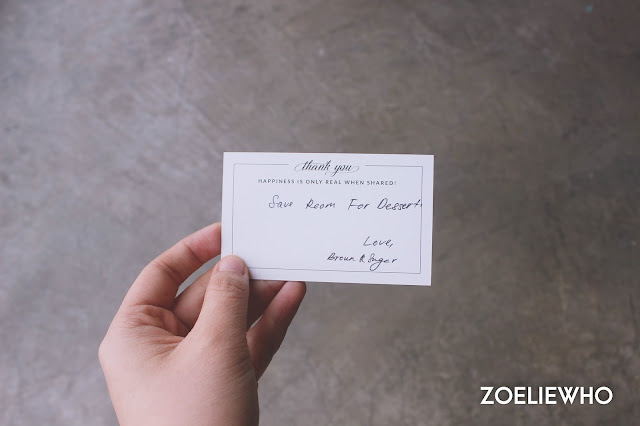 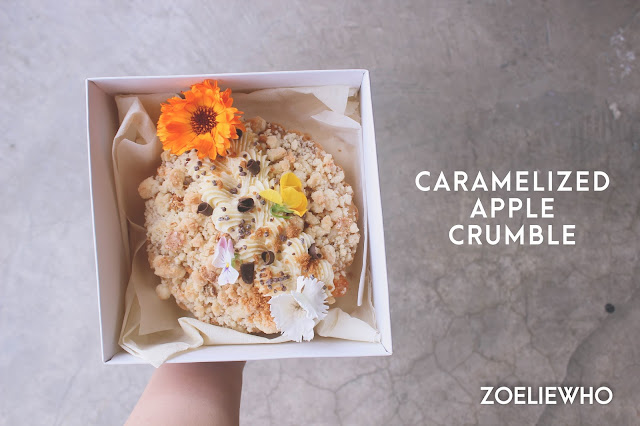 Taking a closer look, it does look like a mini flower garden with crumbles acting as dried soil and flowers as, well, just flowers HAHHAH. I think the tiny choco pieces are… fertilizers? >w< Here’s a top view on the cheese tart. 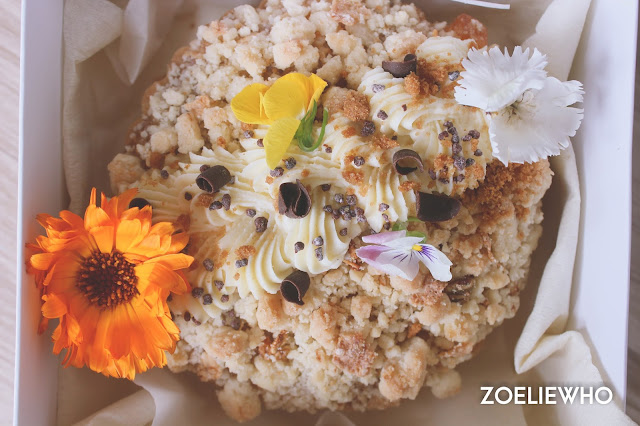 There’s this piped “cream” on top which I think is cheese piping? I don’t know hahahhaahhahahhahaha pls let me know if you know what’s that.
It’s not butter nor icing. Not even butter cream. 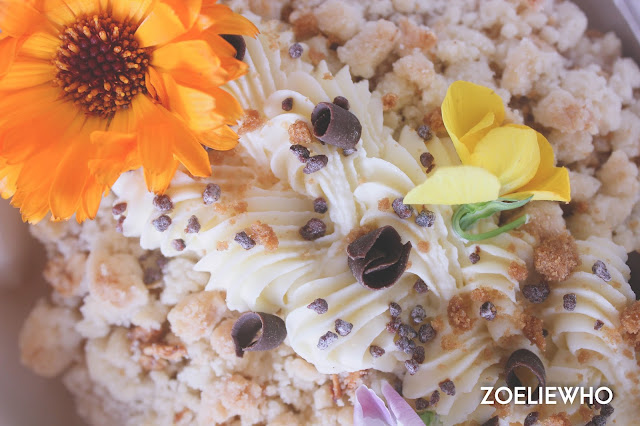 Alright. I’ve taken this piece onto a plate. This is how the full thing looks like. 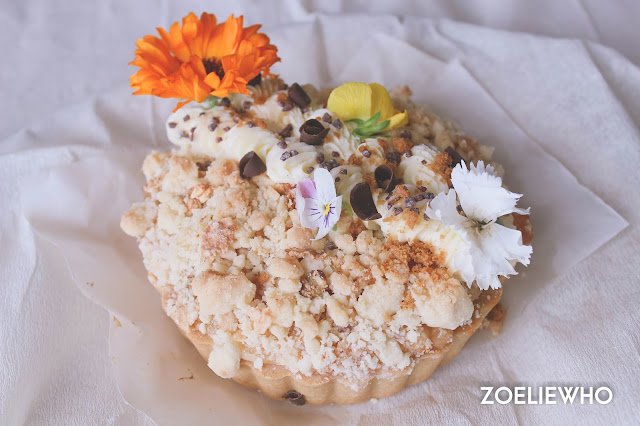 Cutting the cheese tart was actually hard because the crumbles would just go every where and some of the apple paste would slide off due to the cutting pressure. It was sort of messy but I’ve managed to cut them into 9 pieces for me and my colleagues to eat.
My boss was so eager bout it, he quickly came back to the office once I’ve posted a picture to our office group chat. “WHERE’S THE CAKE,” he asked the moment he opened the door (not so exaggerating but yea). I was taking the exact picture below while he “barged in,” my colleagues said. He was preparing himself for the cake, holding a bowl and a fork before I could even cut them into smaller pieces. But he didn’t wait for me as I continued to contemplate whether I should cut them into triangles or squares. He took the knife from me, cut himself a piece and ran off enjoying it. Eventually he ate two portions because another colleague wasn’t intrigued by desserts. (YOU FOOL.) 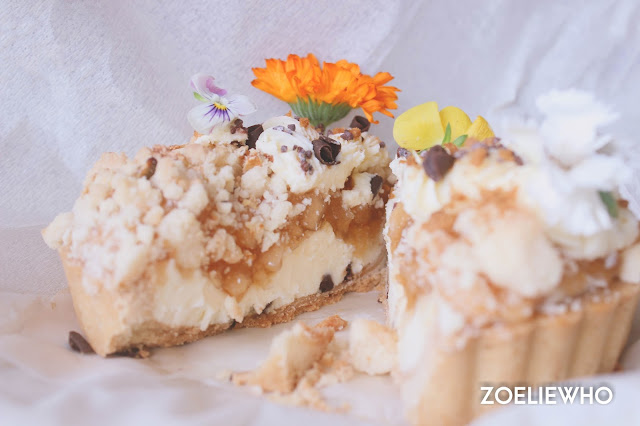 A clearer visual explanation of the crumbling part can be shown below. It’s not even the worse part yet HAHHAH but yeah, I would suggest not to buy this size for 9 people. It’s very hard to distribute them in a better looking shape. I’ve tried and I somewhat failed. 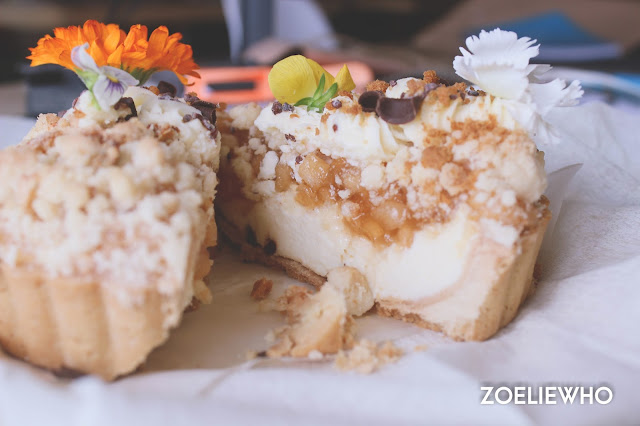 The apple chunks taste good with the caramel paste. The sweetness is just right without being cringey with the cheese. It’s a plus point because other bakeries can’t nail it the way BnS did. 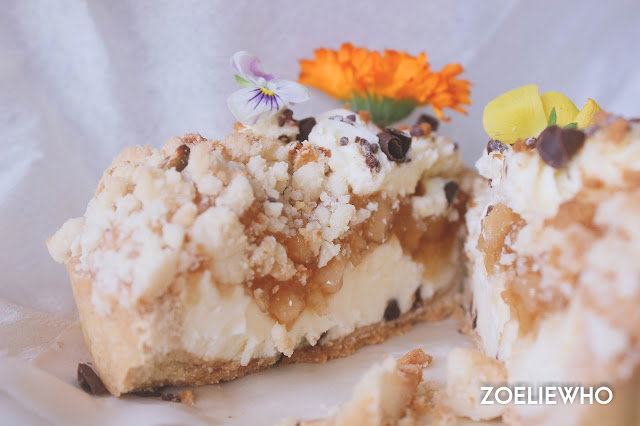 Overall opinion:
Caramelized Apple Crumble flavour is just like the Berry Pie: a very classic piece of flavor that many had tasted from McD since a couple of decades ago. Comparing to Mcd’s, this one as a better taste to it that doesn’t make me shiver or cringe. Just like American’s berry pies, this cheese tart taste very much like a homemade goods. The feeling of “home” is what I’m trying to emphasize. It feels very much like a granny’s pie except that this is a cheese tart.
I love the way that they visualized a tiny garden on top of the cheese tart. Seeing the flowers there had actually made my day brighter because I was expecting a plain looking cheese tart similar to the picture from their website. It’s not a bad thing to be plain looking. It’s just the element of surprise that they had added on top that makes it feels more special.
Again, the same thing as the previous blog post, the crusts that they made are always excellent. Not too hard or too loose. They add that crispy texture to the soft cheese, creating a perfect combination in your mouth and on your tongue, allowing that Tasty-Bakery-Goods taste lingering in your mouth with a luxurious feeling. So goooooood. So yummmyyyyy.
The feedback from my colleagues ranges from okay to yummmmmm. You can say that we have a set of people with diverse personalities and likings, so not everyone could appreciate the cheese tart in the same way as I do. (or my boss too lmaoooooo he ran off before I asked for detailed opinions.)
Give this flavour a try if you’re unsure about chocolate, berries or nuts.
I’ve also purchased this for my birthday along with two other tarts, one large one small. (Yeah, I bought three cheese tarts from them for my bday hehhehehe)
________________
I personally still prefer Tangled Berries 🙂
________________
That’s all for this post! 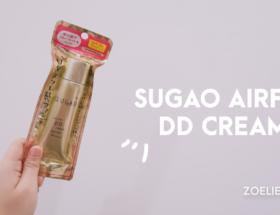 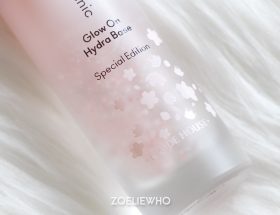