It was kinda like hitting the jackpot when I found out that there’s a Japanese Restaurant in Sunway Pyramid that sells pork :DD
I know a couple of Japanese restaurants that sells pork but those are in MidValley.
The one I ordered is the Pork Kimchi Rice set at the price of around RM19 (inc. gst + serchar).
The photo below shows what is what:
Everything that’s supposed to be hot was served hot, like just-cooked hot.
The rice is warm and just nice, although it doesn’t taste like sushi rice (wth zoelie)
Check out the gifs below and look at the steammmmm

Do you see the steammmm?

Anyway, the Kimchi Pork was good tho.
Although they used sliced pork meat instead, like the kind they use for steamboat, but it’s still tastes good. The amount of meat is decent, like franchise-shop-decent. They put mushroom a lots of garlic into the dish as well, so if you’re not a fan of those, it’s better that you don’t order this dish.
The flavour is just right.
There’s no nose-drooling that happens if your meal is very spicy.
The meat is well cooked, the mushrooms are well cooked.
I’m suspecting ginger in the dish tho, or was it in the miso soup.. hmm
The miso soup is a bit less in taste as compared to other Japanese Restaurant
but it’s not to the point where you will refuse to drink it.
The cabbage is fresh and crunchy too.
The green tea is just meh. 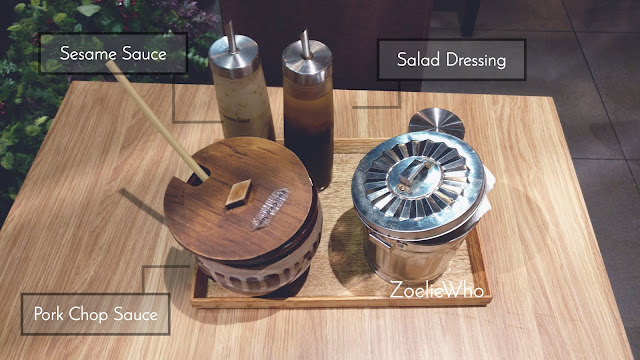 To eat the cabbage, you can use the salad dressing available on every table.
The down part is that you can’t squeeze the bottle because its made out of glass.
Trying to pour it out is kind of a hard task too.
You might end up being a little too aggressive to it, which I try not to be.
There’s also the Pork Chop Sauce available for their pork chop dishes. 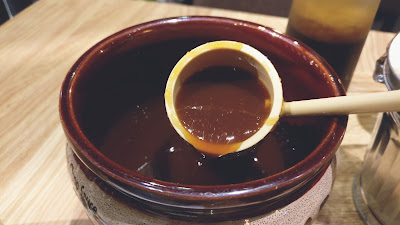 I tried a little with the cabbage and it doesn’t taste bad.
It’s really not bad tho. I can’t really describe the taste but it’s the kind where you won’t feel like throwing up after eating lots of it.
By the way, if you order some certain set meals, you can actually refill on these items:
– Rice
– Sliced cabbage
– Miso Soup
– Green tea (?)
Will I go back again?
Definitely.
But not so soon since it’s a bit pricey. 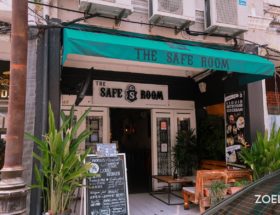 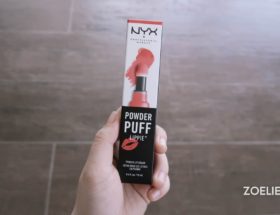